« Neil Young Puts His Money Where His Mouth Is, Writes Big Fat Check for GMO Labeling
Lines Out the Door for Nation’s First Organic Drive-Thru Restaurant » A recent BuzzFeed video had terrified everyone with a list of what really goes into processed meat: liquefied meat? Rodent hairs? Silicon Dioxide? But are these claims really true? Let’s find out.

Claim #1: Chicken Nuggets Are Made From a Liquefied Meat Product

Most likely. After a photo have surfaced claiming that chicken nuggets were made of pink slime, McDonald’s produced a video that was meant to prove otherwise. In the video we see a line of workers cutting pieces of chickens, then the camera cuts to a pink mass sliding out of the tubes, although it doesn’t look the same as the infamous “pink slime.” The woman in the video announces that it is “100% white chicken meat.”

Yet when doctors from the University of Mississippi looked at two chicken nuggets from two undisclosed restaurants through a microscope, they found 40-50% skeletal muscle, and the rest was a combination of fat, blood vessels, nerves, skin and organs, as was published in American Journal of Medicine and reported on by The Atlantic.

Dr. Richard D. deShazo said: “It’s a combination of chicken, carbohydrates, and fats, and other substances that make it glue together. It’s almost like super glue that we’re eating. In some fast-food restaurants.”
Claim #2: Rodent Hairs are Legally Allowed in Your Food

TRUE! U.S. Food and Drug Administration’s Code of Federal Regulations recognizes that food can have “unavoidable defects,” and it established the maximum level of these defects that supposedly “present no health hazard.” FDA has a list of ‘Commodities and Defect Action Levels’ and the phrase “rodent hair” appears in it 73 times. For example, it allows up to 3 hairs per 100 grams of apple butter, up to 10 hairs per 25 grams of ground paprika or 50 grams of cinnamon, and up to 4 hairs per 225 grams of macaroni and noodles.

Claim #3: Meat Can Be Treated with Carbon Monoxide to Keep It Red

TRUE! Many meat manufacturers do indeed use what FDA considers a “safe dose” of this gas to give it that vibrant red look – it makes the meat look fresh, even when it’s not. Its use in meat is banned in Canada, some European countries and Japan, reported ABC News.

Claim #4: About 70% of Poultry Raised in the U.S. Has Been Fed Arsenic Based Drugs

Potentially. In 2011 the FDA asked Pfizer to discontinue their animal drug 3-Nitro® (Roxarsone) that contains arsenic, after they discovered that chicken treated with this drug had increased levels of inorganic arsenic in their liver comparing to untreated chickens. The other company that has admitted to using arsenic in an animal drug is Zoetis, and they promised to remove this product by 2016.

The FDA did not admit or disprove the 70% claim, and it is unknown how many animals were treated by arsenic-containing drugs.
Claim #5: The Pink Color of Farm Raised Salmon Is Created with Added Dyes

TRUE! Though there is no official statement by any company, after corporate farms started receiving criticism and lawsuits for failing to disclose their usage of artificial colors, farmed salmon started appearing with “color added” on its label. 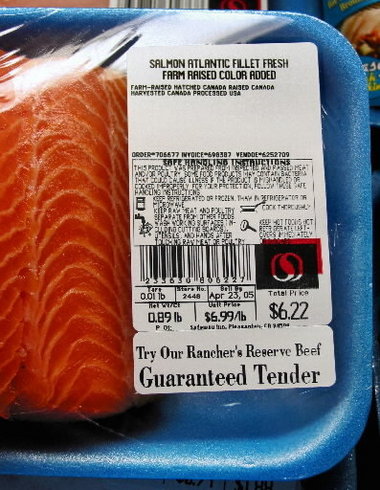 Photo by The Oregonian

Claim #6: Hot Dogs Are Filled With a Blend of Meat (Trimmings of Fat and Starch)

Yes. United States Department of Agriculture: Food Safety and Inspection Service defines a hot dog as “comminuted…semisolid products made from one or more kinds of raw skeletal muscle from livestock (like beef or pork), and may contain poultry meat.” A hot dog may contain up to 30% fat or 40% fat if mixed with water. It is also allowed to add up to 3.5% non-meat binders such as dry milk or cereal or 2% soy protein. Most hot dogs also contain maltodextrin, which is produced from starch.

Claim #7: Silicon Dioxide Is In Wendy’s and Taco Bell’s Meat

Somewhat true. Silicon Dioxide, natural and synthetic, has been labeled “generally safe” by the FDA with a restriction of no more than 2% per food item. It is not recommended in large amounts, because there have been no studies done for them. It is found in Wendy’s chicken breasts as well as brioche bun and chili. It is not on Taco Bell’s ingredient list, at least not officially.

Potentially. Ractopamine is an additive which makes the cattle grow bigger faster. It has been banned in over 160 countries, but not the U.S. Under its branded name Optaflexx it has been mostly used on pigs, but is becoming popular for other livestock. Its usage has been overshadowed by Zilmax, also banned in most parts of the world.

Zilmax has been removed by the company in 2013 after an increase reports of animal deaths and health issues surfaced. While Zilmax was on the market, 70-80% of cows had received a drug such as Zilmax, reported Fortune Magazine. However, that number is unknown after its removal from the market. It is known, however, that many companies switched to using Optaflexx, which is expected to have the same side effects on the health of the animals as Zilmax, and that meat from cattle treated with this type of drugs is not labeled appropriately.

Claim #9: There would be 4,000 Fewer Cases of Bowel Cancer If We Ate Less than 70 Grams of Processed Meat a Week

Somewhat true. American Cancer Society’s list of ways to lower the risk for colon cancer includes “(eating) less red meat (beef, pork, or lamb) and processed meats (hot dogs and some luncheon meats), which have been linked with an increased risk of colon cancer.”

Cancer Research UK also states that eating more than 25-50 grams of processed meat a day increases your risk of developing bowel cancer by 9-50%. Reducing our intake of processed meats would reduce the chance of bowel cancer, but exact numbers differ in different studies. And don’t forget, if you do eat meat, the source is extremely important and pastured from local farmers is always best.