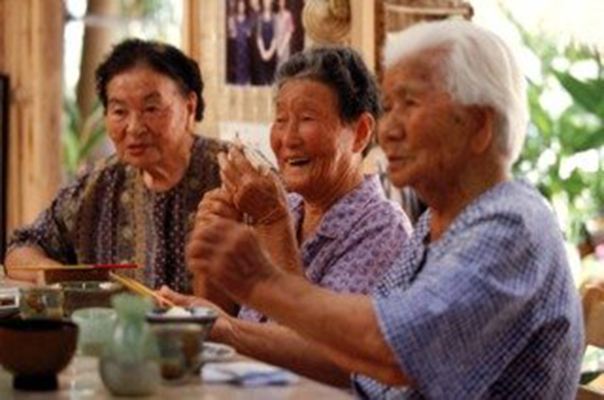 People from Okinawan Islands of Japan live in one of the Blue Zones, where people are 10 times more likely to live to the age of 100. Photo: BlueZones.com

Most of people in the United States start believing early on that they will not live to 100 years old. We watch the daily news, read health statistics, and observe our older relatives, and indeed if we follow the path of the majority the outlook is not that bright. Even though we are living longer now — the life expectancy of a man in the US is 76, and 81 for a woman – our health is very poor comparing to other developed countries.

A survey of adults age 65 and older in 11 developed countries showed that the US has the highest rates of chronic illnesses: 87% of older adults reported at least one, and 68% at least two chronic conditions. More than half reported taking at least four pharmaceutical drugs. There are so many medications, surgical “fixes” and self-claimed anti-aging techniques, and yet we are among the sickest. Is it then possible that living a long healthy life has nothing to do with the medical system, and almost everything to do with… diet?

To answer this question scientists study centenarians – people who are 100 years old or older. And one of these groups, from the Okinawan Islands of Japan, used to receive most of their nutrition from just one vegetable.

The Diet on Okinawan Islands of Japan

Okinawans live in one of the Blue Zones, places in the world where people are 10 times more likely to live to the age of 100. Okinawans are among the healthiest and longest living people in Japan, and they are able to take care of themselves longer, living a high quality of life even as they continue to age. Almost two-thirds of the population function independently at age 97, reported Forks Over Knives.

What do the Okinawans eat? The local government have been keeping diet records since 1949. This is what their diet looked like at that time (based on percentage of whole calorie intake):

All that makes a calorie intake of 85% carbohydrates, 9% protein, and 6% fat. When Okinawans followed this diet, their health used to be outstanding as reported in the study ‘Caloric Restriction, the Traditional Okinawan Diet and Healthy Aging.’

As shown below, this diet was the foundation for a population that continued to live relatively disease-free for decades, in stark comparison to their Japanese mainland counterparts, and even more so to the aging populations in the United States. 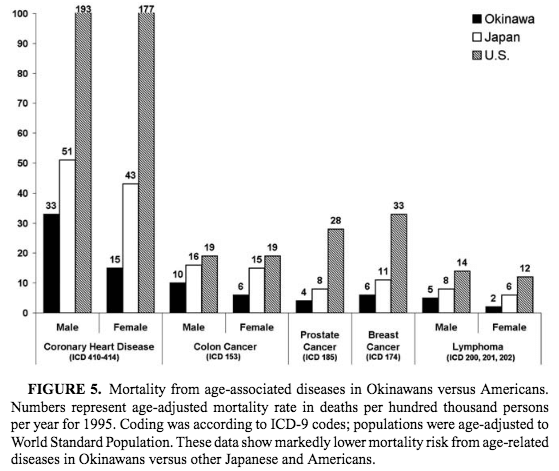 Sadly the younger generations have forgotten their love of sweet potatoes, and substituted them with meat, white rice, and processed foods. As the result, they have gotten sicker, gained weight, and are not living as long. 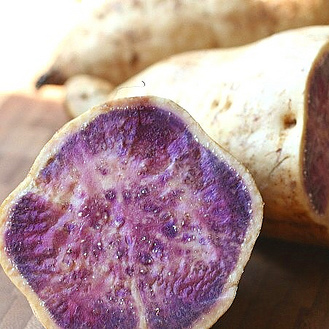 The sweet potato- specifically of the purple variety, used to be the staple food of Okinawans. Source: DownToEarth.org

What we see in the diet of the Okinawans is that they consumed more than two-thirds of their calories from just one food source – sweet potatoes. Are sweet potatoes a health food? You bet they are!

Sweet potatoes are welcomed on our Thanksgiving holiday table as a side or in a pie, but we usually do not talk about them the rest of the year – and we should. Sweet potatoes are a great source of beta-carotene (converts to vitamin A), healthy fats, and antioxidants. And many studies point to them being an anti-aging food.

Here is what we have learned about sweet potatoes from nutritional research:

Sweet potatoes of different varieties are sold year round, and there are many ways to eat them: baked, roasted, fried, steamed or grilled; boiled in a soup, added to a baked good, or added to curry.

With so much evidence behind their incredible benefits including the ability to sustain one of the world’s healthiest populations, the Okinawans, as a staple food, are you going to add more sweet potatoes to your diet?

For more articles like these in your inbox you can subscribe (and get a free eBook) by clicking here. You can also learn more about the Okinawan Diet in the book ’50 Secrets of the World’s Longest Living People’ by Sally Beare.

Categories: Holistic Health.
Tags: diet for a long life, diet of Okinawans, how to live to 100, sweet potato diet, sweet potatoes antiaging, and what do centenarians eat.