« Breaking News: Bayer Stock Has Now Lost Almost 50% of Its Value Since Merger With Monsanto
Thousands Take to the Streets of Switzerland, March Against Bayer While Demanding Shift to Sustainable Agriculture » 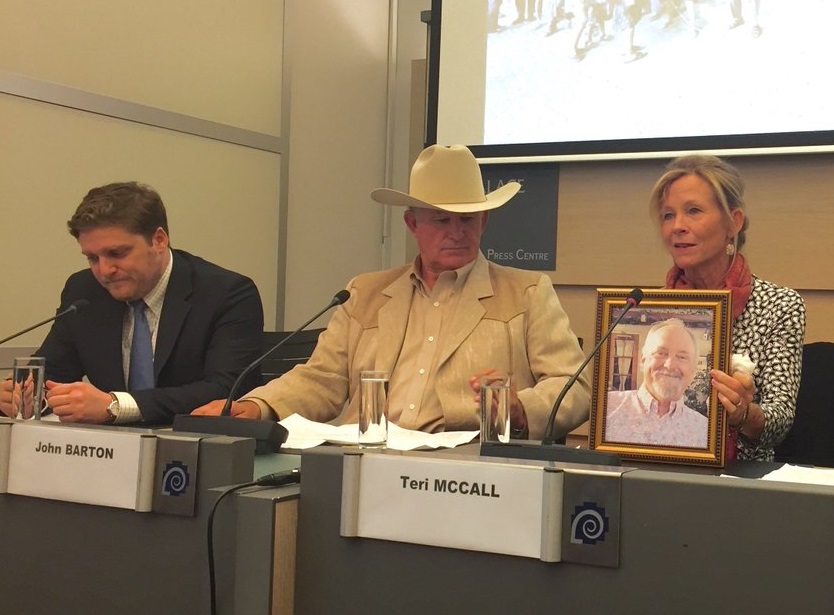 Teri McCall holds up a picture of her late husband Jack, who died of terminal cancer. Photo via Baum Hedlund Law

The lengths the company has gone to in order to protect the reputation of Roundup are legendary.

Key safety studies were confined to “secret reading rooms” in Europe. Ghostwritten articles were allegedly funded by Monsanto on the weedkiller’s safety, and disseminated to the unsuspecting public.

And according to Ken Cook of the Environmental Working Group, Monsanto “manipulated its own research, colluded with regulators and intimidated scientists to keep secret the cancer risks from glyphosate.”

While the “conventional” farming system of GMOs and Roundup perpetuated by Monsanto and Bayer continues to take center stage in the United States, its days could be numbered.

And the ushering in of this new era could very well be fueled by the very legal system Monsanto used to attack farmers for patent infringement, believe it or not.

According to a new article from NBCNews.com, thousands of Roundup-related cancer cases are still pending, which could put a monstrous dent in the bottom line of Bayer.

Recently, Bayer, which purchased the Monsanto Company in 2018, was ordered to pay over $2 billion to a non-Hodgkin’s lymphoma sufferers Albert and Alva Pilliod, a California couple who sued over cancer damages allegedly inflicted by Roundup.

Approximately 11,000 cancer cases against the new Bayer/Monsanto mega corporation are pending according to the NBC News report.

One plaintiff, retired farmer John Barton, 70, said he would spray a thousand gallons of Roundup a day to kill weeds on his cotton farm outside Bakersfield, California. His clothes would be drenched in the weedkiller by the end of the day.

Barton used the Monsanto system because of the convenience factor, but it has cost him his health, and may cost him his life. Barton has swollen lymph nodes after contracting non-Hodgkin’s lymphoma.

“They said it was as safe as table salt. It’s so safe you can drink it,” Barton said to NBC News. “And it’s so effective now with GMOs,” he added, referencing crops genetically modified by Monsanto that are engineered in a lab to withstand the chemicals, “that they can spray it over a multitude of crops and it gets into the root structure of just the weed and kills the plant totally.”

Barton is a plaintiff alongside 40 others, including Teri McCall. If he and his fellow litigants receive settlements anywhere near what the Pilliods did, it’s safe to say Bayer and the former Monsanto Company are in big trouble.

Bayer says it will challenge the precedent-setting Pilliod ruling, and said it was “disappointed in the jury’s decision.” It added that the U.S. EPA found the “consensus among leading health regulators worldwide (is) that glyphosate-based products can be used safely and that glyphosate is not carcinogenic.”

But attorney Brent Wisner, who has worked on these cases for years on behalf of plaintiffs, strongly disagrees.

“Legally this is preposterous,” Wisner said to NBC.

“There are lawsuits involving drugs and products that have been approved by the EPA and FDA that won, so there’s a strong body of case law that says that doesn’t excuse you of liability. And compounding that, we have internal Monsanto documents in which they admit this is geno-toxic — they know this causes cancer.”

The question now is whether or not Bayer will be able to continue to further execute its vision for the farming system, which includes a new secret five-step plan for poisoning our food with increasing levels of toxins, as released in a leaked investor report, as well as a new GMO division funded by billons of dollars.

Bayer CEO Werner Baumann said he had “no regrets” about the Monsanto purchase back in September 2018, but if legal trends continue, he may change his tune: the aforementioned billions Bayer has earmarked for more toxic food experiments may instead go may going to cancer-stricken farmers, groundskeepers and gardeners instead.

Thanks for reading! Speak of secrets, the new film Secret Ingredients (produced by one of the world’s leading GMO and Roundup research groups) is free to watch now for a limited time . Click here to watch Secret Ingredients now. You can also view the movie’s trailer here