« Farmer Reveals: These 3 Claims on Chicken Labels are “Basically Meaningless”
The Top Five GMO Ingredients to Watch Out For and Avoid in Nutritional Supplements »

A lot of people don’t realize that the human body was in fact designed to handle stress — it’s just the type of stress most people deal with currently that presents the biggest problem. The stress of surviving an encounter with a predator as our ancestors faced in the jungles or on the plains is far different than the stress of dealing with nagging bosses, bad drivers or non-stop text and email requests, and our body’s stress responses have been thrown out of wack as we struggle to cope with “modern life.”

Dr. Michael Platt, who is an author and expert in bio-identical hormones and adrenal function, has always had a penchant for natural medicine, as he became disenchanted with Rx drugs early in his career.

A sad story — the death of his mother from breast cancer at age 61, led him to become more aware of hormones and their role in health, especially adrenal health.

He also shared his top 8 foods for healing adrenal fatigue naturally and much more (see below):

AHW: Hi Dr. Platt, thanks for joining us. When did you realize that adrenaline dominance and the stress response played such a huge role in our health? Was there a “lightbulb” moment for you?

MP: It was not until 2008 that I became aware of how adrenaline in excess had a significant impact on a person’s health. It initially revolved around ADHD, which is all about adrenaline, and progressed to other conditions associated with excess adrenaline. There was no “ah-ha” moment, just a series of observations with the addition of logic and intuition. AHW: What made you decide to write the book ‘Adrenaline Dominance?’

MP: For many years, my goal has been to change healthcare in this country. My first attempt was with my book ‘The Miracle of Bio-identical Hormones.’ This book brought thousands of patients to my office from all over the country and all over the world.

It is the number one hormone book in Germany, a country that appears to have a lot more interest in exploring new methods of wellness.

My second attempt to changing healthcare was to write a manual to teach doctors about hormone therapy. It is called ‘The Platt Protocol for Hormone Balancing’ and provides a lot more useful information than doctors can receive at medical conferences.

It provides the only information in the medical literature to tell doctors how to eliminate problems related to excess adrenaline in their patients. However, getting doctors to accept ideas that are not provided by drug companies is a tough sell. It has occurred to me that if healthcare is to change, it will not be because of doctors, it will be because of patients who get angry enough to demand change and who start questioning their physicians as well as a medical system that has little interest in their being healthy.

This is the primary reason for my new book, ‘Adrenaline Dominance.’

AHW: It seems like this is a problem many naturopathic doctors have attempted to tackle but still seem a bit baffled by at times. Is there a point that you think a lot of people are missing or is it more a matter of the patient taking health into their own hands?

MP: You are correct about naturopaths being baffled. They are the ones who focus on a condition called ‘adrenal fatigue’. It is a classic example of why it is so important when dealing with hormone therapy to treat the patient, rather than their lab tests. This condition resulted from the presence of low cortisol levels in morning specimens of saliva.

Saliva tests can be exceedingly inaccurate, especially in people with high adrenaline levels. Adrenaline, as part of the fight-or-flight response, cuts off circulation to areas of the body not needed for survival.

This results in cold hands and feet, IBS, tinnitus, and a cutoff of circulation to the salivary glands causing a significant disruption of hormones in the saliva. All the symptoms of ‘adrenal fatigue’ are actually those of adrenaline dominance. And yes, definitely, people  have to be proactive about their health. 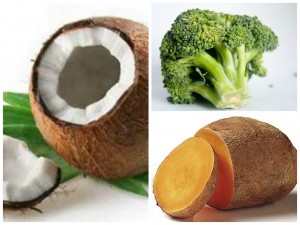 Three foods that can help people suffering from adrenal fatigue.

‘Adrenaline Dominance’ provides not only insight as to why people can put out excess adrenaline even when there is no perceived danger. it explains all the conditions associated with excess adrenaline, and it provides the knowledge of how to successfully lower adrenaline levels using an approach not requiring the intervention of a doctor. It literally puts a patient’s healthcare in their own hands.

AHW: A lot of authors and doctors seem to claim that there is one main cause of ill health whether it be inflammation, too much sugar, etc. What makes the stress response in particular such a key issue for the natural health community to focus on?

AHW: If you had to pick 5 foods that help with the stress response the best what would they be and why?

MP: I will start with the two most helpful and then add some others: Coconut oil (or any other medium chain triglyceride) are the best fuels because they produce ketone bodies – the best fuel for the brain. The second best are green vegetables, which represent the best sugar for the brain. Yellow vegetables, black beans, oatmeal, brown rice, and sweet potatoes or yams (are also great for supporting nourishing the adrenals).

AHW: Anything people should know about your book in particular? Thank you for joining us!

MP: It is not hard to get patients well – you just need to treat the underlying cause of why they are not well.

I explain that contrary to popular thinking, it is not a learning disorder. Another important aspect about the book is that there is a strong likelihood that the most common cause of excess weight can actually be attributed to excess adrenaline. As a result of this, many people are actually gaining weight while they are sleeping.

Thanks for reading! You can check out Michael’s book on Amazon by clicking here. This article was first written in April 2015 and updated in August 2022.